When I began following blogs in crafting circles, I regularly came across the acronym "w.i.p." & wondered exactly what I was getting myself into!!  I soon realised it stood for work in progress and so today I would like to share my own W.I.P. which I hope will soon be finished satisfactorily :-)

When we moved in to our house the original Victorian fireplace had been removed and replaced with a huge, dumpy looking 1930s one that unfortunately had deteriorated over the years so that it was no longer safe to light a fire in.  Because of the old design of our house we desperately need as much heat as possible so not having a fire was NOT an option so we had to remove it.  I did this myself, painstakingly taking it to bits and clearing out all the debris behind it and in doing so discovered many of the original red tiles that had once been part of the original fireplace.  Many of them were smashed or badly burnt & dis-coloured but a few were in good condition once I had cleaned them. We had a Victorian fireplace and surround installed that was in keeping with the room but unfortunately the 1930s hearth had been a lot larger than the new one so there was a large hole where the parquet flooring stopped & the new hearth began.  As money was tight (when isn't it?) I decided we could not afford to have a professional fix the parquet flooring so I would have to do something to fill the hole.  After much swearing, hurt fingers, banging head against the floor as something else goes wrong or is much harder to do than anticipated this is what I have got to so far. 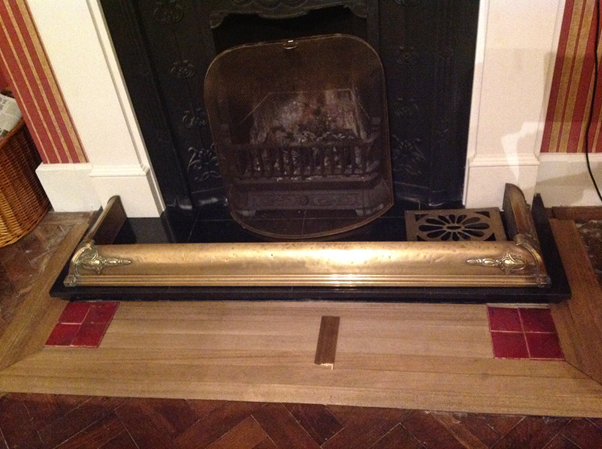 The next stage is to varnish it so that it looks more the colour of the tester piece you can see and then finally seal around the top edge by the hearth with a piece of beading to hide any gaps (in an old house nothing is ever straight or at 90 degrees!!)

I am also really happy that I have been able to incorporate some of the original tiles as I feel they are back where they belong.

I'd love to know if you have experienced any similar problems and how you got around them.  In particular if anyone out there has any tips for parquet floor I'd be delighted to find out more.  Let me know :-)
Posted by SENCO Cat Herder at 23:55