Joining in with Claire Justine over at: 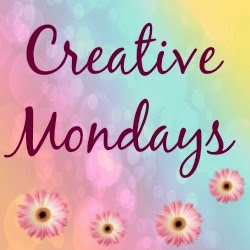 Today I am going to blog about something that is a pretty rare occurrence for me - actually following a recipe as it is written plus taking some photographs to share!

The occasion was a dinner party we hosted over the weekend for some of the local people my hubby has got to know since he moved over here more than a year ago.  Before I actually moved 100% over here too he was rather by himself during the week for the best part of a year and these kind souls took him under their wing so it was a bit of a thank you.

Hubs is one of those who likes to do rather OTT cooking (in my opinion being somewhat more in touch with good old fashioned nosh!) and he ALWAYS follows the recipe to the dot.  He also rather worships Jamie Oliver so his menu came straight from a variety of Jamie's cookbooks.

Being the helpful sort, I said that I would help out with the deserts and was promptly given - yes you've guessed it - Jamie recipes for a chocolate with brandy desert plus orange polenta biscuits.  I have to be honest and say the recipes weren't TOO difficult to follow and here are the photos I took - 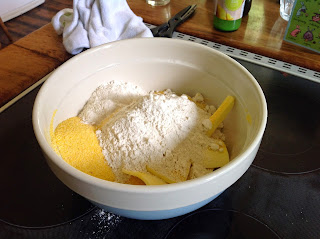 butter, plain flour, sugar, polenta all needed to be rubbed in together before adding the eggs and orange zest 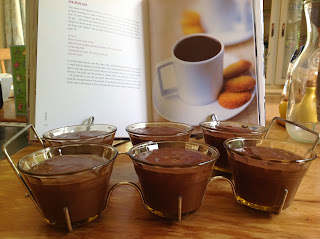 The chocolate puds looked pretty much like the photo 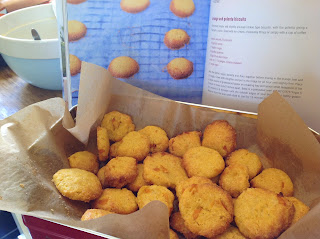 Jamie's biscuits were FAR neater and all the same size than mine!

However, the chocolate puddings were rather too rich for my liking and incredibly stiff - it was like eating heavy chocolate fondant - so if I was to do this again I'd probably make them more mousse like by adding egg white as Jamie suggest you can!  I also don't know which espresso cups Jamie uses but the recipe made far more than would have fitted in six of mine - hence the pots!  The orange polenta biscuits were a BIG hit with everyone and they did taste like nothing you'd be able to buy in a supermarket so that was good - however zesting oranges was VERY time consuming so I'd only be doing this again on rare occasions.

But in all of this I must say that the BIGGEST hit of the entire meal (which did make me feel rather sorry for my dear husband who had spent as you can imagine HOURS in the kitchen preparing and cooking the main courses of a stuffed lamb dish, chicken in lemon sauce dish with accompanying different veg and potatoes) was my sherry trifle.

I think I had better say how I make this amazing desert.
Take one bought jam swiss roll - price 69p and cut it into pieces and line a large bowl with it
Pour on liberally some sherry - found in the back of the cupboard - heaven knows how old!
Open a large tin of fruit salad - price 89p and tip that on top of cake slices
Boil a kettle to make packet of custard - price 33p - allow to slightly cool and then pour over contents in bowl
When all totally cool decorate by spraying a circle of cream from a can around the edge

Total preparation time - in region of 10 mins!!!!  Cost - approx £2 - serves 8-10
I didn't even bother photographing this desert mainly because as you can see it is not really cooking - is it?  However, everyone absolutely loved it and the remaining servings were fought over by two of the guests as take home treats!!

I'd love to know if you have any funny stories about cooking recipes that possibly didn't work out the way you expected or gave unexpected results or couldn't even be considered cooking as most people think of it?  Leave a comment and let's share a laugh or two :)